On the easel right now!

So a week ago, my friend asked me what kinds of paintings I was working on. Sorry Melissa, I forgot to tell you in my email! These are the paintings that I'm working on, although neither one is finished. They may change drastically before I decide they can leave my studio. 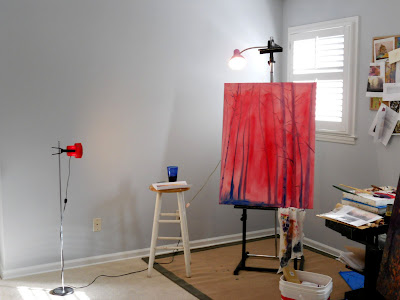 Notice how the red light and blue cup are placed in this picture. (love that!) Sometimes my influences come from the oddest (subconscious) things. When finished, this one will be a line of trees. (Gustav Klimt influence) 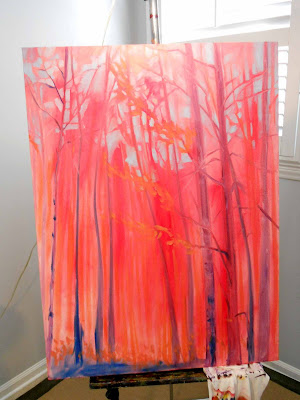 And then I added some light blue sky! This is my favorite part of painting trees. 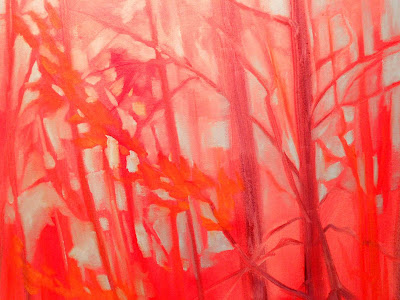 See how the forms start to take shape when I paint the negative space between the branches?Again, notice the similarity in the painting's sky color and the light blue of the walls in my studio...strange.
Below is a pointillism piece that is a little further along. It's 4 feet by 5 feet in size! That's a lot of dots. And nope, it's still not even close to finished. 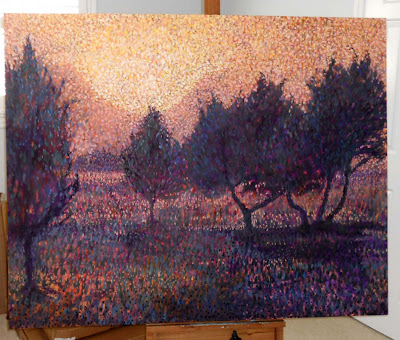 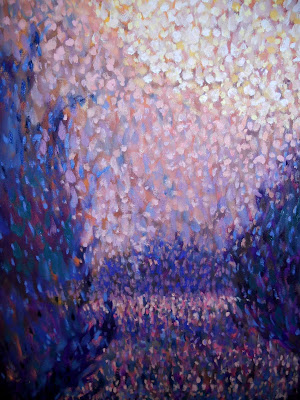 Paintings aren't always pretty while they're in progress. In fact, most of them start out with bright colors, even garish colors, and then they go through a "chromatic grey" stage where I use muted tones that resemble baby food or dirt! Painting only looks like magic in the end because most folks don't see the labor-intensive, problem-solving, messy, behind-the-scenes process. That's my favorite part!
Posted by Katie at Thursday, March 10, 2011 1 comment: 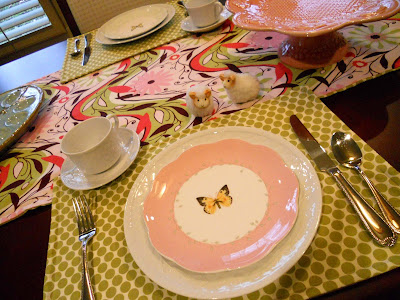 I've been on spring break for a week... remember those days? Road trips, tan lines and the smell of coconut sunscreen? Yeah... me neither... We'll leave those fantasies to the men in our lives. Actually, my spring break from grad school rolled around while it was still 50 degrees outside and drizzling rain. But I'm not complaining! Spring break is niiiiice. Instead of catching some rays, I made a table runner and some place mats to cheer up the dining room!
I just finished them and I've been so stinkin' happy about it that I just set up the table-- twice! 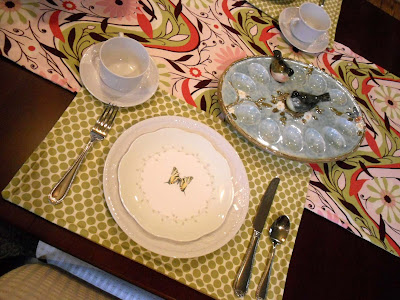 When I first got the idea, I went into Sew Heavenly to purchase some fabric and on an impulse I chose this bright happy pink floral and the green polka-dot patterns.
It wasn't until I got home that I realized my china would clash with the pink! Fortunately, I have some pretty white everyday dishes that look spectacular with it, and some pretty butterfly dessert plates. I dug through my fabric scraps and made the reverse side of my runner into a design that fit much better with our wedding china. I also made the back side of the place mats with a neutral nutty-colored canvas. I really love them! 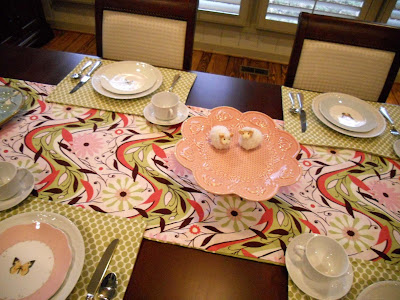 Now I have two looks for the price of one. 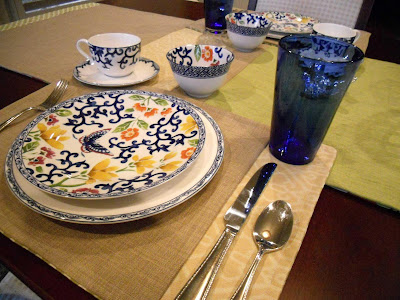 Funny story about the wedding china. When Dave and I decided to register for china, we popped in a few stores to check out the patterns. I was leaning toward a pure-white basket-weave pattern that I thought would go with everything. Dave told me that since I was an artist I was going to have to get some colorful china. 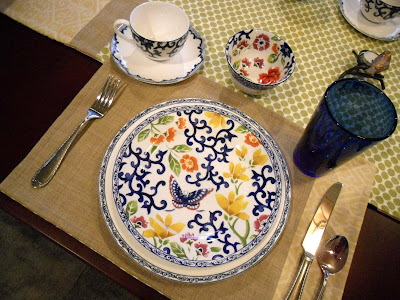 I'm so glad we did! It's fun to have such pretty colorful dishes for snazzy dinner parties.
Posted by Katie at Wednesday, March 09, 2011 2 comments:

Good old Thomas Jefferson, or T. J. for short, was quite a fellow. Not only did he build a spectacular house and university, (and become president) but he also authored the Declaration of Independence and a document that set forth the idea of separation of church and state.
Jefferson believed education was the most important building block of a country. Without education, people can't decipher truth from fiction or make intelligent decisions for themselves and their families. Hooray for T. J.! Dave and I visited Charlottesville this weekend where we learned a lot about T. J. and a lot about the values that shaped our American history. T. J., you make us proud! 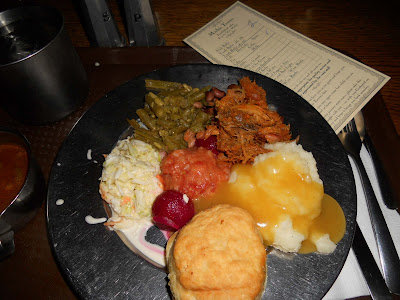 First stop on the list was Monticello... well, I take that back. First stop on the list was lunch after our 3 hour drive. Where did we stop? A tourist trap, of course! Dave and I pulled into Michie Tavern, built in 1784. We were herded in by ladies wearing colonial calico dresses and bonnets, and before we knew it we were in line for a southern-cooking style buffet lunch complete with tin-cups and pewter-looking plates! The dining room had a real fire burning in the fireplace and it just smelled like Thanksgiving. We didn't even know what hit us until they told us the price of the meal after we sat down with a heap of food!
Don't do what we did (unless you're a huge Southern-cookin' fan and you don't mind a 16 dollar buffet that doesn't include your beverage-- seriously people). I have to admit that it was good and it was amusing. As much as I love my country, I'd have to give my vote for the French, Spanish and the Italians when it comes to food that expensive. Screw the bonnets... I'll take a beignet any day.
Then we toured Monticello! Here are some pictures. 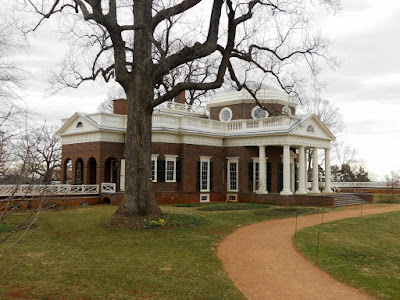 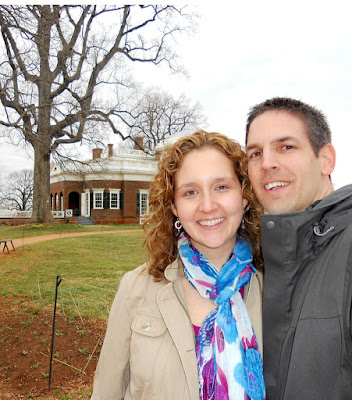 That evening we walked around "the mall" in downtown C-ville and we ate at the most delicious restaurant in town- ZoCaLo. I highly recommend the salmon and the cheese plate. I've never had Spanish-inspired salmon, but this was to die for! The menu says it includes "green chili and goat cheese couscous, smoked pico and cascabel cream. " YUM. Also, the manchego cheese with spicy quince spread-- delicious beyond belief. I don't even know what a quince is, but I'm hoping I can re-create this for an appetizer at some point. I didn't take any pictures, but you should take my word about the salmon and visit their rockin' website too. 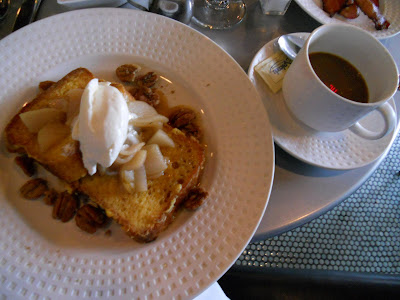 We woke up Sunday morning and had brunch at Petit Pois. We ordered Brioche French toast (pictured above) that rivaled the French toast from our favorite place in the world... Harris bakery in Savannah, GA. My favorite parts of this place (besides the food) were the blue tile on the floor and the pretty white textured dishes. Yay for details and good design! The tavern could surely take some notes from restaurants on C-ville's downtown mall. For a 16 dollar buffet, I want some good design AND some good food! 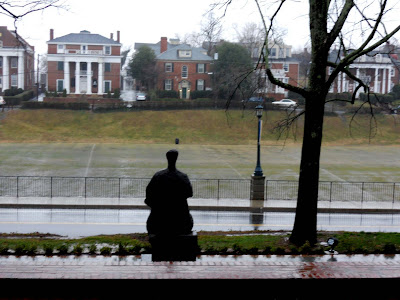 Here is Henry Moore's seated figure overlooking part of the UVA campus. She waits in front of the art museum to welcome visitors like us even when it's raining cats and dogs. 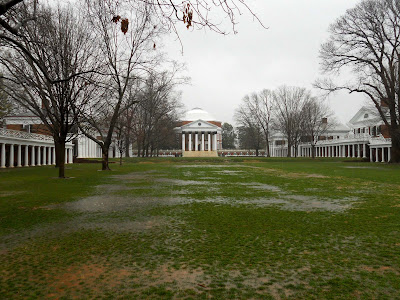 And here's T. J.'s very famous Rotunda. Although Monticello was very impressive on the inside, the Rotunda was decorated lack-luster. Let me describe it-- white walls and oval rooms with lots of old books and period furniture. There. Done. Save the walk in the rain and come back when the UVA lawn is more sunshiney. Bring a frisbee and a dog while you're at it. 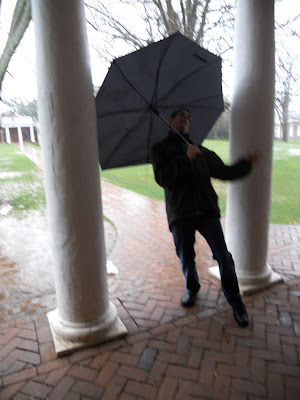 Dave's umbrella got stuck between T. J.'s columns on the UVA front lawn. I guess Jefferson didn't think of everything...nobody's perfect, you know!
Posted by Katie at Tuesday, March 08, 2011 1 comment:

Sponge Bob and the Jefferson Pilot Building (a stretch) 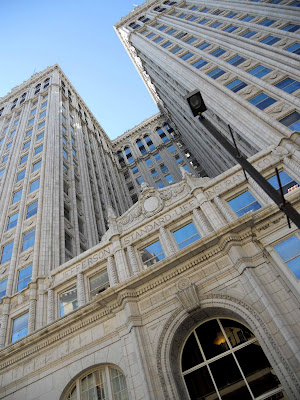 Since I was a little girl, I remember driving along hwy. 220 or along interstate 40 and seeing this building as we approached Greensboro's downtown. I wondered what the history was with this building. It's a dominant feature on the Greensboro skyline much like the Empire state building is a dominant feature in NYC. If Jay-Z wrote a song about Greensboro instead of NYC, it would have been about the "Jefferson" state of mind! 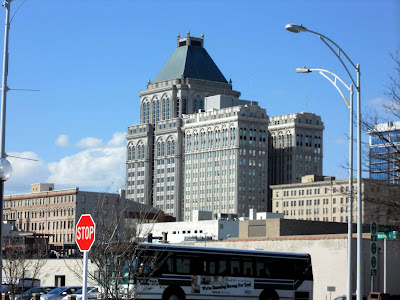 It turns out that this building was the tallest building in N.C. and possibly the tallest building in the entire south when it was completed. It was built by an architect from New York named Charles C. Hartmann. Hartmann also assisted with the ceiling design of NYC's Grand Central Terminal's main lobby before coming to N.C. Later on he designed the Woolworths building that is now the International Civil Right's Museum (site of the first sit-ins in Greensboro). 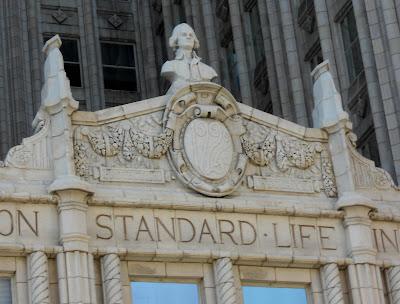 The Jefferson Standard building was completed in 1923, and you can see the year 1922 carved in the ornate decor above the door. There is also a bust of Thomas Jefferson there. The company that built this building--Jefferson Standard Life Insurance (Jefferson-Pilot) company-- was named for good old T. J., and so they wanted to give him a solid shout-out. Several times I've come across a quote that says Greensboro was as proud of this skyscraper as a child is of his very first tooth! 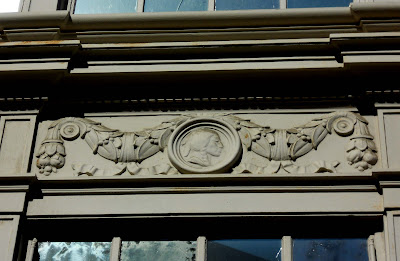 The building is largely made of terra cotta tiles and granite, and while several styles were combined to form the architecture, the prevailing style is Beaux Arts. (such a beautiful name for a style) There are also Buffalo Nickels carved in stone that appear above each ground-level window. They represent "thrift and economy" according to Wikipedia. The U-shaped floor plan was designed so that even the interior offices could receive fresh cool air in the hot humid southern summers (and light). Hartmann was so clever! 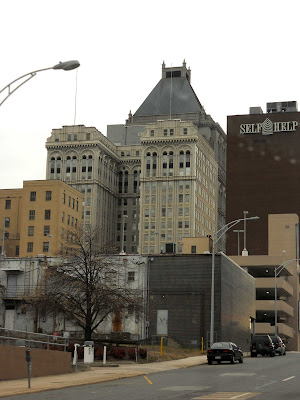 The huge honking part with the grayish-greenish rooftop wasn't completed until 1990. Now you know! 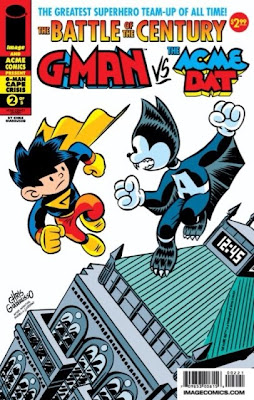 So.. what does this building have to do with Sponge Bob Squarepants? This pictures says it all. This is the cover drawing of a G-Man comic book-- a special 2009 edition, at that. The sequential artist is Chris Giarusso. The artist marked the release of this comic by coming to Greensboro's Acme Comics bookstore along with some other big sequential artists. Gregg Schigiel, one of the artists of Spongebob Squarepants, was there for the release! It's a lame connection, I know-- I originally misunderstood and thought the artist who drew G-man was also the Spongbob squarepants artist, but he's not.. oh well! At least you can see Greensboro in the skyline of G-man comics!
References:
http://ncarchitects.lib.ncsu.edu/people/P000118
http://en.wikipedia.org/wiki/Jefferson_Standard_Building
http://www.digtriad.com/news/local_state/article.aspx?storyid=130359
Posted by Katie at Sunday, March 06, 2011 2 comments: