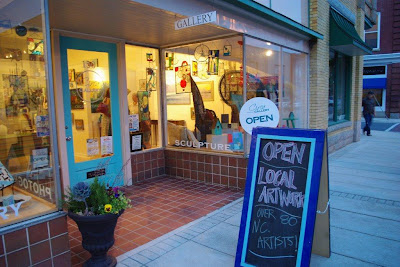 Oh it's been a while! April flew by and now we're rounding the corner into June... 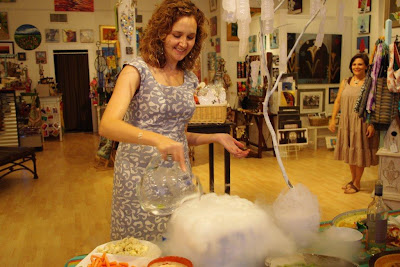 My big weekend was only a week ago, but it feels like months. The Vivid Fog opened in Asheboro with a wonderful crowd. Somehow all the paintings were hung beautifully, the paint was dry, cookies were baked, and we even managed to have some real fog via dry ice! I was so happy with everything! I saw lots of people from my Asheboro days and some more new friends from Greensboro too. Four paintings sold at the opening, and since then I've heard that two more have found new homes too! 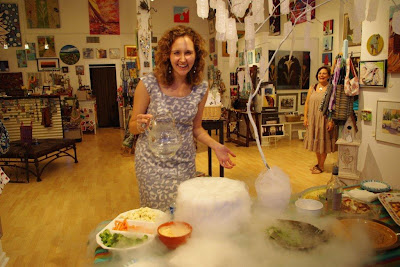 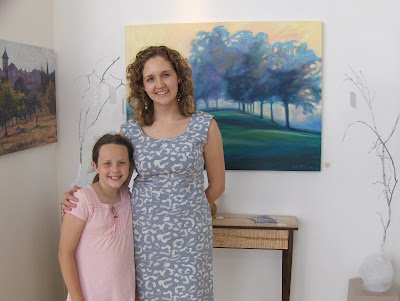 Emma, aka the greatest helper in the world, came to the show early and helped arrange the "poetry-ee's" with Hollis. 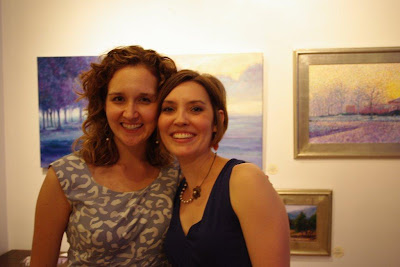 Here I am with my friend Carla. She and her husband, Toaster, took some of these awesome pictures. 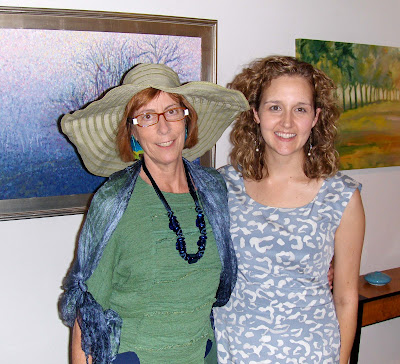 And here I am again with my friend, Hollis. She helped me SO much with this show and I am grateful to her! She took the rest of these awesome pictures. 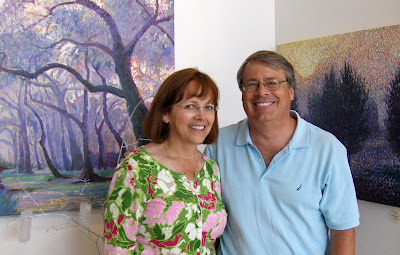 After the opening, Dave and I scarfed down some pizza with my parents at The Flying Pig, a new establishment in A-town. I was impressed! Even better than that part-- I ran into about 4 people that I graduated with (nearly 10 years ago!). They all looked the same, which is fabulous because it means we haven't aged a bit since we were 18! 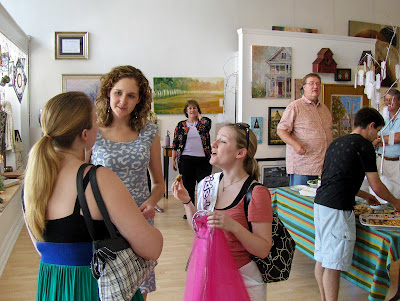 After pizza at "the pig," we hopped in the car and drove to Raleigh for the night. Artsplosure festival was the next day, and even more paintings and giclee prints sold there! I was completely impressed with the festival. The artists there had really beautiful things and the show ran like butter! I'll most certainly be back. Speaking of butter, I'm off to bake a cake for Dave's birthday-- which is tomorrow! 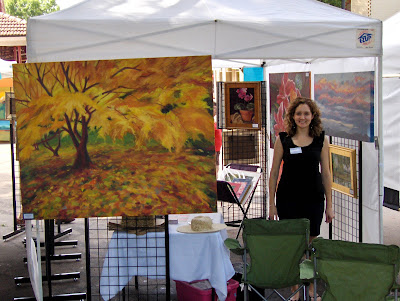 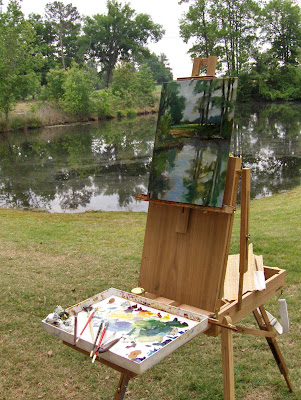 The week of my birthday, I gleefully hopped in my car and buzzed down to Faytteville for a plein air workshop with artist Diane Johnson. It was a birthday gift to myself--and a swift kick in the pants as far as motivation goes. The ride down was full of heavy traffic (because Fayetteville is nasty like that), but once I arrived at Cape Fear Studios, I just fell in love with painting all over again.

On Friday night, we had a brief meet and greet, and then I stayed up half the night reading my latest Jodi Piccoult novel and eating jelly beans. In spite of my midnight novel rendezvous, I woke up early Saturday morning and met all the painter ladies to travel to a breathtaking farm outside of the city. 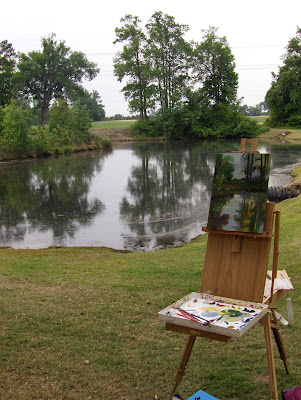 I immediately settled on the subject of a beautiful tree-line and a perfect reflection in the still lake behind the farmhouse. It was a gray day, but that worked in our favor because it shielded us from the glaring sun. I was so excited to find this composition-- mainly because I've been looking at a series that Monet did of a similar subject. If I lived on that farm, I would paint this scene on a daily basis-- or realistically--at least several times a year!

When I was about 75% finished with this painting, it started to rain. It wasn't a horrible ran though, so I was able to finish it before packing it in for lunch. 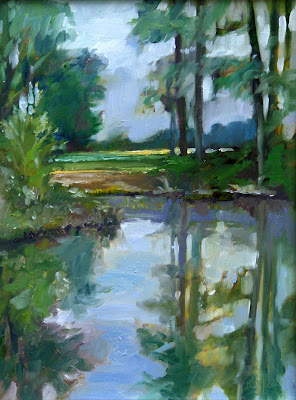 After lunch, I watched Diane give a demo and I was completely inspired for my next painting-- another view of the lake and the trees. This one was harder because the light kept shifting. Sun would come out and then hide again, and the wind started picking up and disturbing the reflections in the lake. I'm still happy with the result in spite of the difficulties. 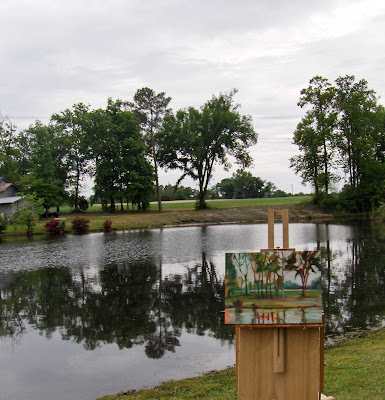 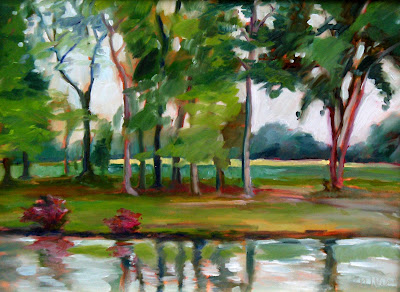 We packed everything up on Saturday and gorged ourselves on local strawberries and other delicious food. I had to stop on my trip back home to purchase a whole box of the fresh strawberries. There is NOTHING like a vine-ripe strawberry warmed in the sunshine-- nothing. Once Dave and I move into a house again, I want to learn how to make strawberry jam. It may be a next summer project, but I can hardly stop thinking about it even now. 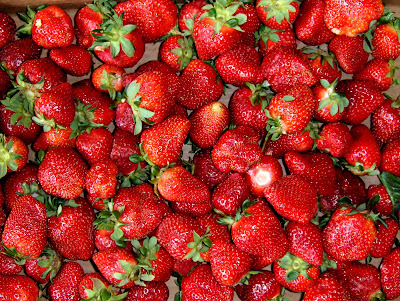 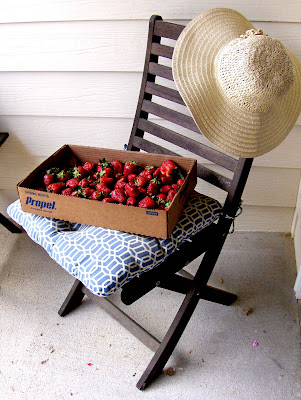 Sunday was more of a challenge. I woke up to ominous cloudy skies and a whipping wind. At the studios, we reluctantly decided not to make our pilgrimage to the botanical gardens for another painting day. All the ladies were smart enough to stay inside and learn about color mixing except for me--- I ventured out into the 20 mph gusts with my brush. I'm just like that-- stubborn. 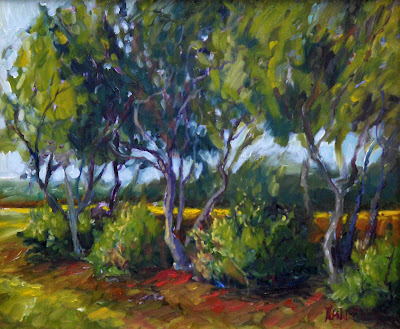 I was out there long enough to pick a composition and being a blustery painting-- but then my palette started to blow away-- trailing paint all over everything. I cleaned up what I could and then shoved all of it in the trunk of my car. Oh well. Later in the week, I returned to finish it up and it's currently one of my favorite little paintings! There is definitely movement in the work, but I made it look much more sunny and bright than it actually was.

When the workshop ended, I came home to a wonderful home-cooked meal from Dave-- It was part of my birthday surprise. At 27, I have this to say-- I am lucky, I am happy, I am blessed, I am content, and I am grateful.
Posted by Katie at Tuesday, May 04, 2010 4 comments:

Last weekend I was driving around with the sun-roof down and the Dixie Chicks cranked up when I caught myself doing something my mother always did. I was tapping my hand on my knee… over and over and over again-- just like Mom used to in the minivan. For some reason, that drove me completely crazy in middle school. I thought everything she did was embarrassing and I’m sure I told her in no uncertain terms. Yet there I was… doing that crazy “un-cool” hand jive.

In honor of my wonderful mother and her subconscious hand-jive, I wanted to focus on Mother’s Day. It’ll be here before you can shake a stick at it—May 9th. Fortunately, you still have time to thank Mom for all her little eccentricities and for putting up with lord-knows-what from you. 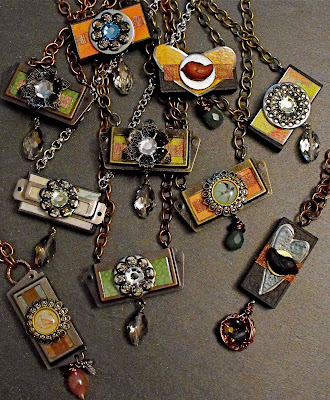 My favorite Mother’s Day gift idea is from Suzi Cook and her one-of-a-kind jewelry creations. A Greensboro artist and mother of one, Suzi’s Mama Medals celebrate mothers everywhere and give credit to their daily heroic efforts. “Motherhood was more than I ever expected as far as how hard it was and the weight of responsibility it carried,” said Suzi. She created her first Mama Medal from a stray domino years ago to celebrate the milestone of her son’s second birthday. “Those two years were a difficult transition and I was proud to make it through!,” she said.” The Mama Medal recognizes achievements of motherhood with fun and funky style! 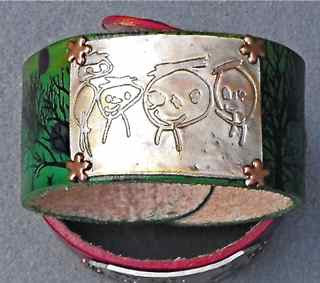 As her son grew and began to draw, Suzi developed a technique to capture his art in metal. She creates custom bracelets, pendants and brooches from children’s line drawings for mothers around the country. This offers cool mom’s everywhere a way to proudly display their child’s creativity. Starting at $68, these can be custom ordered from Suzi’s Etsy site (http://www.suzicook.etsy.com). 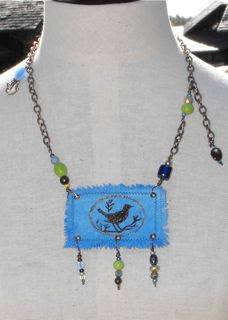 For the mother who has everything, check out Suzi’s hand-embroidered necklaces combining the delicacy of embroidered thread with chunkier chains and beads. These one-of-a-kind babies are featured at Art and Artifacts Gallery (http://www.artandartifactsbr.com/) in Blowing Rock, N.C. “They are fun, whimsical and different… not something you see everyday!” said the artist. 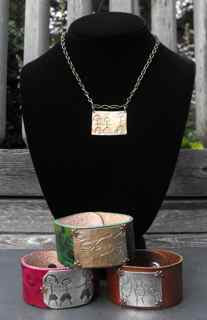 To see more jewelry by the talented Suzi Cook, visit her blog, Frills and Whimsy (http://frillsandwhimsy.blogspot.com/).
Posted by Katie at Saturday, May 01, 2010 1 comment: