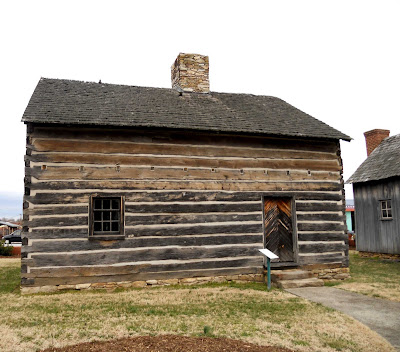 (This picture is of a real log cabin built near Greensboro around 1788!!- it's now downtown at the Greensboro Historical Museum and you can tour the sucker!)
It's fairly obvious that I have not attended to my blog for a few months. I just haven't had it in me to write and elaborate any more than I'm required to in my online classes. That's right...online classes! I started a master's program in January that will officially certify me to teach in the N.C. school system. Hooray! Lateral entry jobs have not really been out there for the past two years, so I decided to buckle down and make myself official once again. Sometimes I think all life really requires is the ability to jump through hoop after hoop in order to make one's self "official." That's a little on the sarcastic side though so I'll refrain from further elaboration.
Anyway, I have COMPLETELY enjoyed one of my classes this semester (I've also completely resented one class that requires me to spew at least 19 paragraphs of BS each week. You know what I'm talking about education majors!). The class I love is called art history methods and content, and it's supposed to teach me how to impart little minds with knowledge of art history. 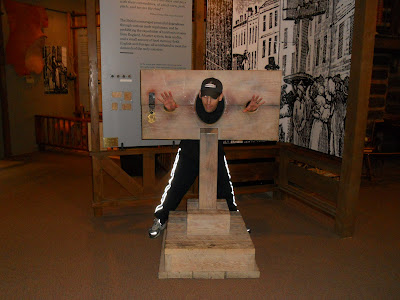 (I drag my poor husband along on my local architecture binges. Fortunately he's up for entertaining historical exhibits and it's given me an excuse to visit a number of fascinating places in Greensboro)
That's the easy part. The hard part is the fact that my professor (beloved, quirky, demanding), has made it her personal mission to make sure her students know all the art history people and architecture bits that she deems crucial. She claims that Americans know more about European art and architecture than they do about American art and architecture. It's true! I can tell you a lot more about French Impressionism than I can about the Hudson River School. Surely we can cover 250 years of American art and architecture in 16 weeks... right? Right! In my class, her difficult hour-long quizzes have produced anxiety, tears and strangely-- even joy.
It surely is a doosey, but I've enjoyed having my art history gaps filled and cemented. I didn't know a darn thing about American architecture, but thanks to this professor, I've discovered that it is THRILLING and that it is ALL AROUND US! I've also discovered new art history movements and painters that were just waiting to reach me. Ever heard of Luminism?
Just last Friday I drove out into the country and found a Georgian/Federalist style home (circa early 1800's) that was supposedly built by John McCain's great-great-great grandfather. I guess old-money helps one become a senator in some circumstances. Regardless, it was LOVELY! Here's a picture: 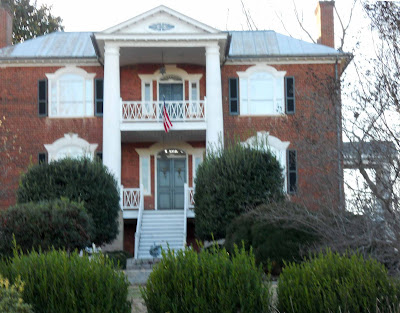 And below is a photo of yet another REAL colonial house in Greensboro. This is the McNairy house that was built between 1762-1781--that's OLD. It used to be located near Battleground and Horse Pen Creek, (roads still there!) but now it is smack-dab in the middle of downtown Greensboro (Historical Museum on Summit Ave.) The house was actually used as a hospital after the revolutionary war battle of Guilford Courthouse- March 15, 1781. That's a mere 230 years ago this month! Can you imagine being carried form the wooded battleground (battleground park) and then landing in this house where some doctor with a knife would have amputated your injured leg? I can't imagine that but it's wild to think about it. 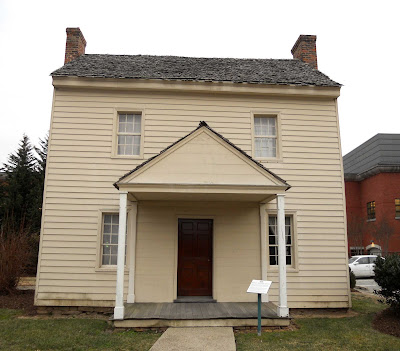 It's so easy to imagine that history was "out there" or that none of these buildings exist anymore. It's just not true! Did you know Greensboro's Elm St. was named that because a former slave planted beautiful Elm trees along the street? Sadly, they were cut down in order to make the town look more urban later on. Sigh... I don't like that trend.
If I wasn't so allergic to dust and afraid of power tools I may have been more into historic preservation. This weekend was a marathon of seeking and finding buildings and homes with fascinating history. For my next blog post I'll tell you what Sponge Bob Squarepants has to do with Beaux Arts architecture in Greensboro...
Posted by Katie at Monday, February 28, 2011 2 comments: