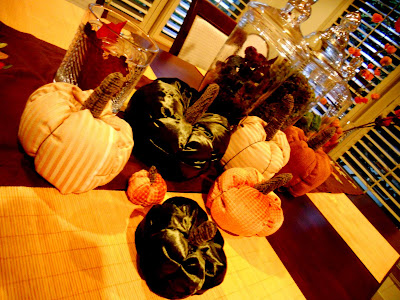 In September, my stepmom told me that she saw velvet pumpkins on a facebook page for one of our favorite stores. I was so excited because I'd seen some in a magazine last year and never found the time to make them before the holidays arrived. I shoved the idea somewhere in the back of my brain-file and hadn't thought another thing about it until that mention.

I stopped by the favorite store... S. Burke, and gleefully asked about the velveteen pumpkins when the clerk offered to help me. Much to my dismay, she looked confused as the dickens...

Sigh. I'd gotten my hopes up for a Thanksgiving tablescape to rival the queen's and now the clerk had let me down. Was I doomed to another pumpkin-patch-less year? No!

Being 100% stubborn, I decided to take the velvet pumpkin issue to the next level. I dug out instructions from the magazine I'd saved for this exact moment. I spent hours and hours making a pumpkin patch one Saturday (ok--- maybe 2 Saturdays and the following Sunday night). At last, my table has a lovely little pumpkin patch that makes me smile. 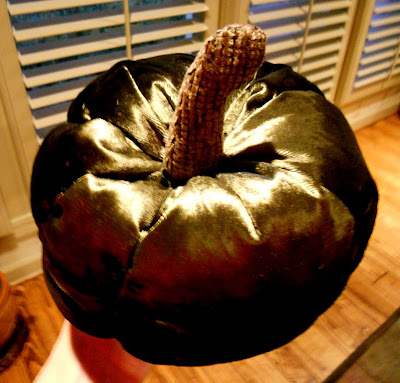 Alas, sometimes I still falter. I showed this velveteen pumpkin picture to my friend, Dana and the first thing out of her mouth was ... Hmm...The stem looks a little phallic doesn't it?

We'll see what my extended family thinks on Turkey Day... at least I made myself happy!


Here's how to make your own pumpkin patch: Martha Stewart Velvet Pumpkins 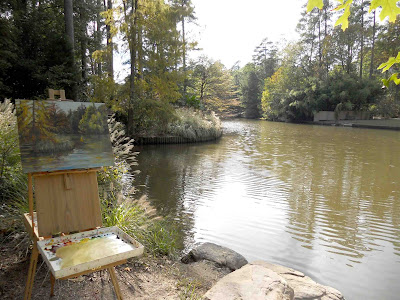 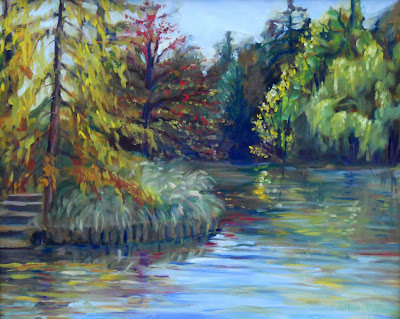 This place did things to me... it rinsed my soul with sunlight and made time stand still for a few hours. I spent Saturday here on a quiet little bench sharing baguette, brie and fig-spread with my great friend, Junghyun. We've known each other since 3rd grade, and we caught up on 6 month's of stories. She's been sea-kayaking, running half-marathons and getting excited about the birth of a twin niece and nephew that came this week!

Monday afternoon I came back to her bench and I painted the view. This piece is a very traditional piece for me. The palette is decidedly fall in nature and it captures that warm autumn glow that is so very North Carolina. I could paint in Duke Gardens again and again.

A glimpse from the easel 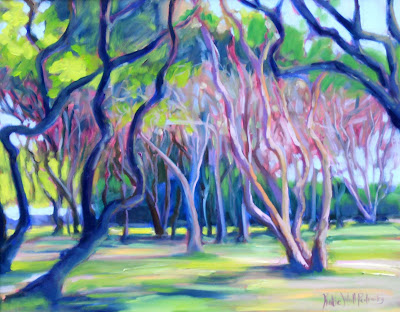 In August, Dave and I celebrated our one-year wedding anniversary by taking a weekend trip to the beach! On Saturday morning, we devoured some challah bread and homemade blueberry jam from our sweet neighbor, Scotty, and then we headed over to Fort Fisher to see the trees.

The light was perfect-- it filtered through the gnarled and twisted branches in patches of sun and shade. I added my signature painterly colors and voila!... Fort Fisher Dance. 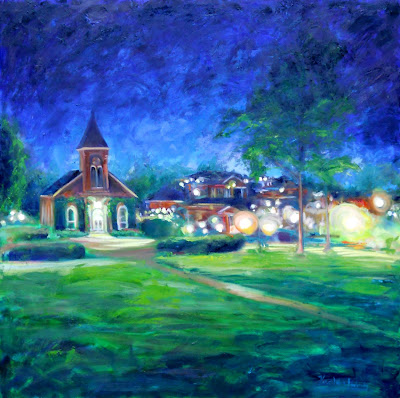 I finished "Evening in Lexington" last week. It began in February as a cold winter scene, and morphed into a warm summer evening as I worked on it through mid September.

Washington and Lee is still one of my favorite places in the world. Last December I traveled to Lexington to deliver some artwork and to work on a print project with Lee Chapel. It turned cold and snowy late one evening and Dave and I took some fun night pictures in the flurries before we met some friends for coffee and dessert. The final painting reminds me of the heady summers I spent in Lexington on a quiet brick campus with beautiful southern charm. I can almost hear the crickets and see the lightning bugs again.

Since my initial Savannah night painting called "La Boheme," I've been fascinated with the colors created by lights at night. In this piece, I began using a palette knife in addition to my brushes. It's got a painterly quality that I'm thrilled with! I enjoyed breaking away from my typical style for this piece. Shine on Lex-Vegas, shine on...
Posted by Katie at Sunday, October 03, 2010 No comments: